The Black Bell in Thames Street

A farthing token issued by a tradesman operating from the sign of the Black Bell in Thames Street, London.

The above copper farthing token measures 15.6 mm and weighs 1.03 grams. It was issued in 1652 by a tradesman, possibly a tavern keeper, operating from premises at or by the sign of the Black Bell in Thames Street, London.

Obverse: (mullet) AT. THE. BLACK. BELL , around a depiction of a bell.

It is not clear if the initials above the issuers surname “Nuce” stand for the first and last names of the issuer or alternatively represent the Christian names of the primary token issuer plus his wife (i.e. Mr. P. Nuce and Mrs. N. Nuce). It is typical to find the latter sets of initials on the reverse side of 17th century tokens in the form of a triad.

Thames Street was an important and very long thoroughfare which ran parallel to the warehouses, homes and other buildings on the north bank of the Thames between the Tower of London and Puddle Dock (south of the West End of St. Paul’s Cathedral). 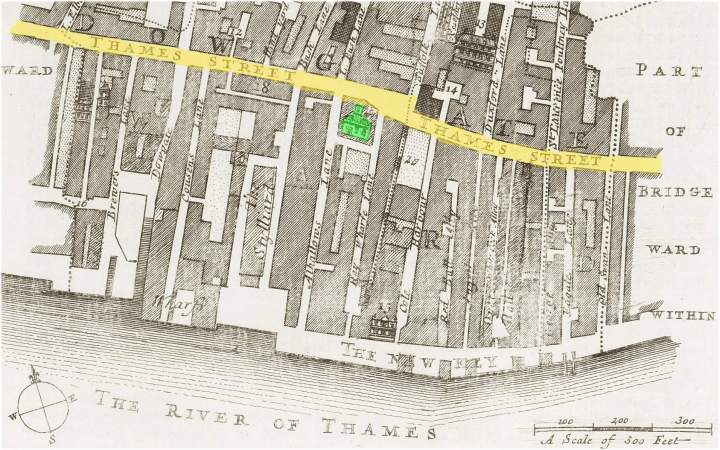 The Church of All Hallows the Great on Thames Street (c.1720)

A review of London parish registers plus other genealogical sources has so far failed to identify a Mr. P. Nuce. However, a review of London Hearth Tax returns for the years 1662 and 1666 indicates one possible candidate with matching initials plus the surname “Nuce”. This match, from the 1662, is for a man by the name of Philipp Nuce who paid tax on a property with 6 hearths in the second precinct of the parish of All Hallows the Great in the Dowgate Ward of the city. It so happens that Thames Street passes directly through this Ward, more over All Hallows Parish Church lies on the south side of Thames Street. As such Philipp Nuce must be considered as a very definite contender as the issuer of this farthing token. The fact that Philipp Nuce is not recorded in the London Hearth Tax returns for 1666 (pre the Great Fire of September 1666) may suggest that by that date he had either left the city or had died. Either of these options is possible.

We can’t be certain of the trade of this particular token issuer but the sign of the Bell or Black Bell was commonly used by taverns in the city during the 17th century. As such our token issuer may well have been a tavern keeper.

Thames Street and the surrounding areas were all consumed during the Great Fire of London in September 1666. It is unlikely that the re-use or memory of the sign of the Black Bell in Thames Street will have survived after the conflagration other than in the paranumismatic record.