The Golden Cross in Chancery Lane

A farthing token issued in the name of the Gold Cross in Chancery Lane, London

The above copper farthing token measures 15.7 mm and weighs 1.05 grams. It was issued by a tradesman (most likely to have been a tavern keeper) operating from premises at or by the sign of the Golden Cross in Chancery Lane in the Farringdon Without Ward of the City of London.

Obverse: (star) F.W.AT.THE.GOLDEN.CROS, around twisted wire inner circle, within is a cross pattée.

Reverse: (star) IN. CHANCERY.LANE, around twisted wire inner circle, within a triad of initials comprising F | .W. | .A , plus a central dot below the “W”.

There is nothing on the token to indicate the date of its issue. However, it is likely that it belongs to the period 1650 to 1660.

This token has a small drilled piercing through the “H” of the word “Chancery” on the token’s reverse legend. This may be a cancellation mark, a deliberate defacement indicating that the token had been made worthless. It has been postulated that such defacing cancellation marks were applied to the tokens in 1672 when they were made illegal by Royal proclamation , or at the death of the issuer or closure of their business. 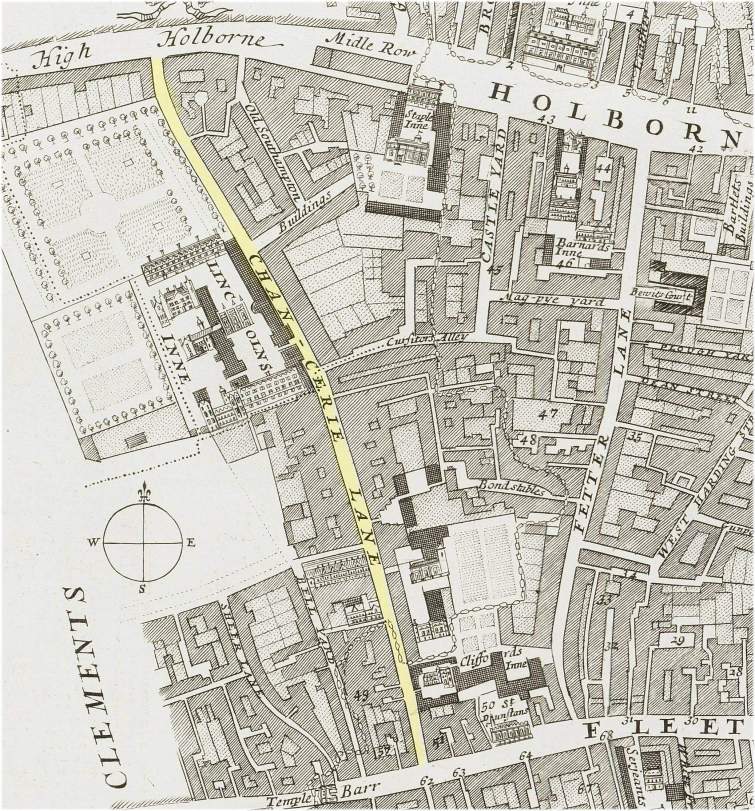 The sign of the Golden Cross was a common London tavern sign so it is possible that this token was used in such a named establishment in Chancery Lane. It is possible that the use of this sign may have derived from a particular site having earlier religious origins.

The initials of the couple that traded from the Golden Cross at the time the token was issued, a Mr. “F.W” and his wife Mrs.” A.W.” have not as yet been positively identified. There were eight individuals living in Chancery Lane at the time of the 1666 Hearth Tax with surnames beginning with “W”. Any one of these may or may not be related to the token’s original issuers. By 1666 the original token issuers may have moved out of the lane or may even have died. Two of those individuals identified from the Hearth Tax returns have initials which directly fit with those of one of the issuers identified in the token’s reverse triad of initials. These two individual are;

The first of these named individuals could very possibly be the same man referred to in the triad of initials on the token’s reverse. The second individual could equally be the wife of the original token issuer who was still trading in the lane after the death of her husband. In both of the above cases the number of hearths mentioned (i.e. 10) fits well with the named individuals occupying a good-sized tavern of the period.