Category Archives: Tokens from the South Bank of the River Thames

Here are listed some some of my brief reseach notes on a random selection of 17th century tokens that were issued by tradesmen living in Southwark and other areas opposite London and Westminster on the south bank of the River Thames.

A mid-17th Century Half Penny Trade Token Issued by Edward Brent of Southwark.

The above mid-17th century copper half penny token measures 20.6 mm and weighs 2.31 grams. It was issued in the name of Edward Brent in 1668 and attributed to a tradesman of that name who operated a business from Pickle Herring Stairs on the south bank of the River Thames in Southwark, London.

Obverse:  The depiction of a boat sailing right.

The above token must have been issued and/or survived in the present era in relatively large quantities as it almost certainly the commonest 17th century trade token known from Southwark (1) .

The vessel depicted on the token’s obverse is a Hoy. Such vessels were small sloop-rigged coastal ships or heavy barges used for carrying cargos of up to approximately 60 tons. In the 17th and 18th centuries such vessels were a common sight on the River Thames. 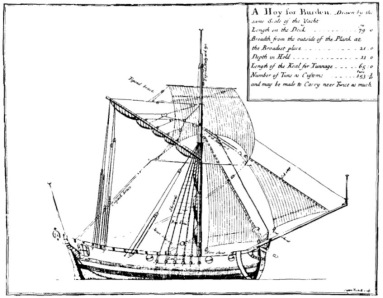 A depiction of an 18th Century Hoy

An undated farthing trade token, which is likely to be of a slightly earlier date of issue , is known to have been struck in the name of Edward Brent (2) . This token also depicts a boat on its obverse and clearly states the issuer’s business address as “AT PICKELL HERRING”. The token also records the initials of its issuer, and his wife in the form of a triad of letters, “E.C.B” (i.e. Mr. E. Brent and Mrs. C. Brent).

Pickle Herring Stairs was one of the many watermen’s landing places on the River Thames where their boats (i.e. river taxis) picked-up and set down fee paying passengers (Note 1). The precise location of Pickle Herring Stairs is shown below as being on the south bank of the river in Southwark, close to the parish church of St. Olave, and off the north side of Pickle Herring Street which ran east along the backside of the waterfront buildings.

A map of Southwark  of 1720 showing the locations of St. Olave’s Church (in blue) and Pickle Herring Street (in yellow).

The Token Issuer & His Family

It is likely that Edward Brent, the issuer of the above half penny trade token, was born in the early part of the 17th century. He was possibly the individual of the same name who was christened on 7th May 1615 in the parish church of St. Olave, Southwark, and was son of Edward Brent, a stone mason of that same parish. He had at least one brother and sister who survived into adulthood (3) .

To date no details of Edward’s marriage or any apprenticeship he may have served have come to light. However, by 1647 it appears that he was married and living on the south bank of the River Thames in Southwark. This is clear as on 27th March of that year the parish registers of St. Olave’s, Southwark record the birth of his first daughter. This was to be the first of Edward’s ten recorded children all of which were registered in the same parish church between March 1647 and April of 1661 (Note 2). In none of the associated birth or baptism records of these children is the name of Edward’s wife recorded. However, based on the triad of issuers’ initials (i.e. E.C.B.) on Edward’s earlier mentioned farthing trade token, coupled with evidence presented in his Will (4) , we know that his wife’s name was Christian (Note 3).

The various parish register entries for the births and baptisms of Edward’s children are further enlightening as they record their father’s profession at the time of each of their respective births/baptisms. Between 1647 and 1652 Edward Brent is described as a “limeman”, that is to say someone employed in the trade and manufacture of burnt lime.  However, those entries from 1655 to 1661 alternatively list Edward as a “shipwright”. This is a fairly dramatic change in his stated occupation but might account for the pictorial designs selected for his farthing and half penny tokens both of which depict sailing vessels. Alternatively this design may be an indirect reference to him having been a bulk carrier of raw materials (i.e. lime, chalk and coal) on the river as would have been dictated by his apparent continued involvement in the local lime trade (5) .

From the mid-17th century, if not earlier, it appears that Edward was a man of some considerable means. By 1649 his involvement in the local lime trade was not merely as a simple commodity trader but as a producer also. In that year he purchased the manor of Ingress in Greenhithe, Kent from Mary Shires and her sons Edward and Robert, both of the Inner Temple, London. Edward paid £1,122 for this estate which included a manor house and farm, fresh and salt water marshes, a wharf, a lime-kiln together with a chalk quarry (6) . The estate and manor house was later to pass to Edward’s oldest son and remained in the Brent family until at least 1689 (7) .

Badeslade’s North Prospect of Ingress Abbey, 1719 (8) . – The Seats of Jonathan and Nathaniel Smith built in 1700 on the former estate of Edward Brent at Greenhithe in Kent (Note 4).

After 1649 it may be assumed that Edward’s principal source of burnt lime was from his own kilns in Kent. These were located both on his estate in Greenhithe and possibly in the neighbouring parish of Swanscombe where he also had business interests (9) . The feed stock for his kilns consisted of stone, quarried from his chalk pit at Ingress, coupled with fuel, in the form of coal, which is likely to have been brought in by sea from the North East Coalfield. His Kent lime works were served via fleets of horse and carts plus several hoys (Note 5) which were used to ship the final burnt lime from his wharves at Greenhithe up the River Thames to distribution and sales depots on the edge of London. Edward operated a further kiln and coal stockyard located close to Pickle Herring in Southwark where it appears many of his hoys were harboured (10) . His principal lime sales and distribution depots, or “lime shops” as he referred to them, which served the city were located close to St. Saviour’s Stairs, in Southwark, and at Hermitage Bridge in the Parish of St. Botolph’s Without Aldgate, London. Both locations would have been served by stockyards, stables and moorings for the initial off-loading and subsequent despatch of lime (11) .

In an Act of Parliament dated 14th July 1659 Edward Brent is listed as one of several individuals who were charged with the duty of appointing and mustering a local band of armed men to form the Southwark Militia.  It is not known if Edward was part of any other of the city’s “Trained Bands” of militia prior to this date but it is from this association that we may assume he was granted the title of Captain which he is known to have held (12) .

The details of Edward’s career development and fortunes are unclear but by the time of the issued of his half penny trade token in 1668 he must have been a man of considerable standing and presumably wealth. In this year he is reported as being an Assistant Warden of the Worshipful Company of Shipwrights (13) and, for the brief period between 6th August and 15th September, he was an acting Alderman, representing the Cordwainer Ward of the City of London. Edward’s electors for this post were none other than the then Lord Mayor of London, Sir. William Peake, Sir Robert Hanson (a future Lord Major of London) and Robert Gore (a London mercer) (14) .

By 1667 Edward owned several properties in addition to those premises which were directly associated with his lime trade operations. These includes an unspecified number of houses in Southwark lying in Clink Street, Angel Street, Angel Alley and two further houses in Winchester Park together with additional properties in Newington, Surrey.

While no burial register entry for Edward Brent is know we know that he died sometime shortly after making his last Will and Testament on 17th February 1676/7 as a now lost monument in St. Olave’s churchyard was recorded in 1734 bearing the inscription “EDWARD BTRENR, ESQ. 1676” (15) . He was survived by his wife Christian and at least five of his ten known children, Edward, Nathaniel, Sarah, Judith and Martha. At the time of his death it has been suggested that Edward Brent was a “dissenter” and this may account for that fact that no burial record can be found for him in the burial register of St. Olave’s Church in Southwark. Clearer evidence exists for the fact that Edward’s oldest son, Edward, was a “dissenter”, at least in his later life. Such religious beliefs could easily been have reflected those of his father/parents (Note 6).

In his Will Edward (which passed through probate on 3rd April 1677) left the bulk of his sizeable estate and lime business to his wife Christian. She was entrusted to continue her husband’s business until such time as her sons Edward and Nathaniel came of age (at twenty-one) or married. Thereafter, the following provisions were to be put in place (16) ;

The last of these two provisions was a shrewd mechanism whereby both of Edward sons would be able to separately operate parts of their late father’s business by effectively sharing the outputs of the family’s single set of quarries at Northfleet.

Edward Brent’s Will made further sizable provisions to his grandson “Little” Edward. These comprised the sum of £800 plus two properties in Winchester Park, Southwark. These were to be held in trust for young Edward by Christian and/or Nathaniel Brent until his coming of age at the age of twenty-one. Edward’s Will also made provision for his daughters, Sarah, Judith and Martha (17) .

Edward Brent made lesser bequests of £10 and £20 respectively to his nieces, Mary Hubard and Joan Albrey plus £10 to his servant Roger Lawrence. Charitable bequests of £100 and £10 respectively were also made to be distributed over time to the poor of the parishes of Greenhithe and St. Olave, Southwalk (18) .

The author would like to thank both Tim Everson and Tim Scotney for providing preliminary information and references which were used in the preparation of this article.

Filed under Tokens from the South Bank of the River Thames