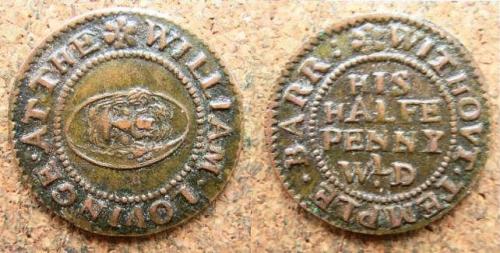 A half penny token of William Lovinge of Temple Barr Without

The above copper half penny measures 20.7 mm and weighs 2.19 grams. It was issued in the name of the Baptist’s Head in the district of Temple Bar Without, Westminster.

Obverse: (rosette) WILLIAM.LOVINGE.AT THE , around twisted wire inner circle, within the depiction of the John the Baptist’s head on  dish.

The Baptist’s Head was a common London sign prior to the Henry VIII’s conversion to Protestantism. It is not known in this case if the sign was that of a tavern or alternative business. The exact location of the business is also not know but presumably it lay off The Strand.

The Strand & Temple Bar Without, Westminster

A similar token was issued John Lawton who also traded at the sign of the Baptist’s Head in Temple Bar Without. Stylistically this appears to be earlier in date than that described above which most likely dates to the period 1665 to 1670.

Filed under Tokens from West of the City Walls