Farthing token from the Ship Tavern, Temple Bar Without, Westminster

The above brass farthing measures 16.4 mm and weighs 1.12 grams. It was issued in the name of a Mr. W. S. & Mrs. M. S. who traded at the sign of the Ship (presumed to have been a tavern) in the Temple Bar Without district of Westminster in 1649. This makes it one of the earliest farthings to be issued in the 17th Century token series.

Obverse: AT.THE.SHIP.WITHOVT , around edge. Within, A three-masted ship sailing left.

The Ship tavern was situated in Ship Yard, a lane which ran off the south side of Little Sheer Lane  and which to the south was connected to The Strand by an alley. This alley was located on the opposite side of The Strand to entrance to Palsgrave’s Head Court.

There is a reference to the Ship Inn near Temple Bar  as early as 1571. 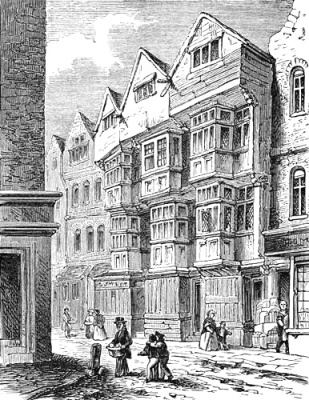 A view from the south west of a 17th Century three bayed, four storey house in Ship Yard (1761)

Filed under Tokens from West of the City Walls